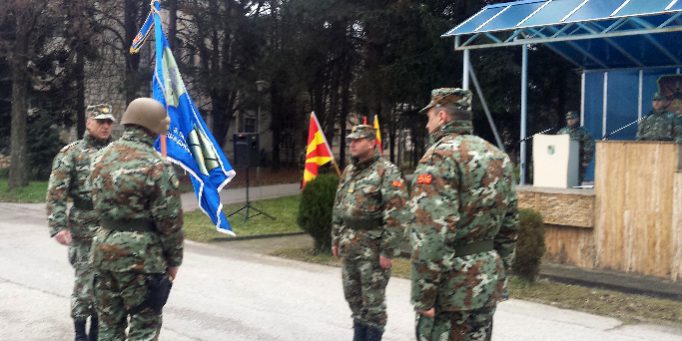 The ceremony was attended by Commander of Joint Operations Command Brigadier General Vasko Gjurchinovski, Chief of Staff of the Joint Operations Command Brigadier General Azim Nuredini, Commander of 1st Mechanized Infantry Brigade Colonel Zoran Mileski, commanders of battalions and chiefs of sections of the 1st MIB, former commander of the unit, representatives of local government, mayors of municipalities in the area of ​​responsibility of 3rd MIBn, legal entities and individuals with which ARM cooperates.

The commander of the 1st Mechanized Infantry Brigade, Colonel Zoran Mileski addressed the lined up soldiers and the audience and emphasized the successes of the unit.

During the handover of duty Lieutenant Colonel Atanas Panovski expressed gratitude to all the members of the unit for the dedicated work and effort.

In his speech Major Igor Spasenoski said that he was particularly honored to be the new commander of 3rd MIBn, a unit recognizable for its successes in ARM. He stated that he would give maximum of his overall knowledge and experience to continue according to the plan to achieve better results and success in the future

On behalf of the members of 3rd MIBn and on his personal behalf Major Igor Spasenoski handed a plaque from the unit to Lieutenant Colonel Atanas Panovski and expressed gratitude for the achieved results.

At the end of the ceremony there was an official handover of the unit flag between the outgoing and newly appointed commander.