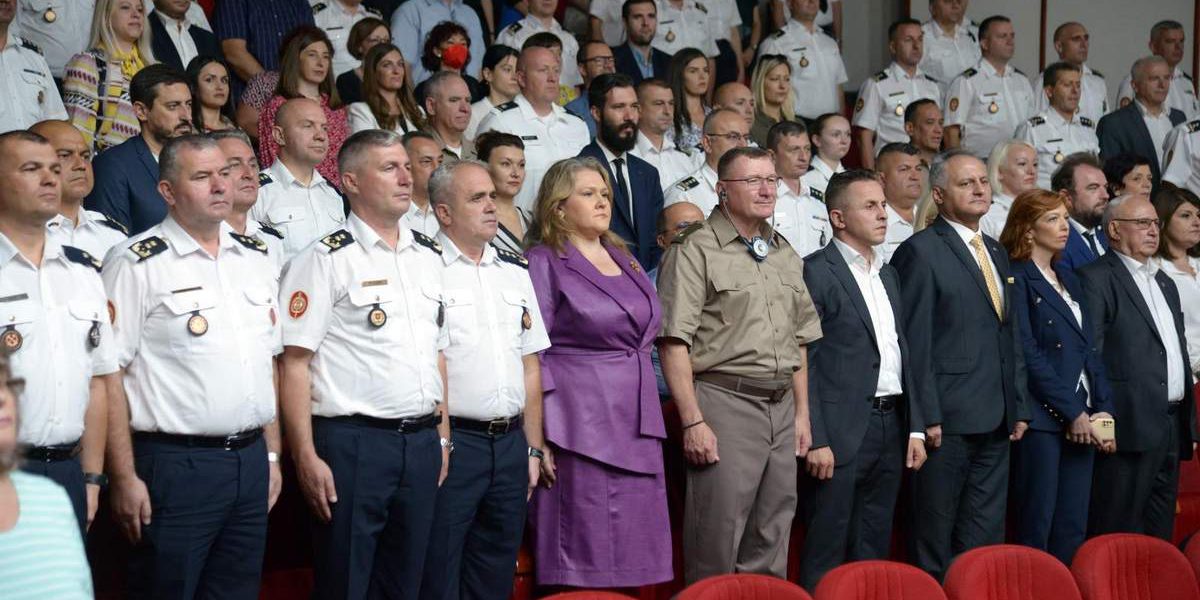 As part of the final activities with which the Army of the Republic of North Macedonia commemorates its 30th anniversary, an official ceremony of the members of the Army from the General Staff and employees of the Ministry of Defense was held in the Army House in Skopje.

At the gathering, with an official ceremony, a large number of recognitions for the achieved results and contribution to the Army were awarded by the General Staff and the Ministry of Defense, including promotions to a higher rank of Army members who meet the requirements.

At the same instant, the Minister of Defence Slavjanka Petrovska and the Chief of General Staff, Lieutenant General Vasko Gjurchinovski awarded recognitions to representatives of the institutions with which the Ministry of Defense and the General Staff cooperate.

The Minister of Defence, Petrovska addressed the employees of the Ministry and the Army members and said that today’s jubilee was not only a number, but that 30 years Army meant 30 years of security, safety and statehood. She underlined that each member of the Army, each member of the defence have their contribution in the establishment of an army with a recognizable image of professionalism, discipline, motivation and success, and that with their energy and dedication we have achieved our key strategic goal – membership in NATO.
“We were alone, and now we are part of one billion people under the collective security umbrella of NATO. The army has something to be proud of in front of its citizens because you perform your tasks honestly, motivated and professionally, even much more than that. When I came to the position of Minister of Defence, the first thing I said was that I do not ask any employee in the Ministry or in the Army for anything more than what I have set out for myself. And, primarily, it is the commitment to the defence and our homeland, the perseverance that brings visible results and the ambition that opens up new opportunities for a better Army, satisfied army members and a safer country. The Army capabilities are not just empty words on paper, but skills in action. The army has shown in action that it is capable and motivated. That it functions according to the highest NATO standards. Our Light Infantry Battalion is the first major unit to be recently assessed according to NATO’s Combat Readiness Evaluation Standards. We can walk with our heads held high as we have shown that we are well on our way to meeting all of the set NATO capability goals. It is primarily your merit”, said Minister Petrovska and added that the Ministry invests in personnel, equipment and modernization that strengthen the Army.

The Chief of the General Staff, Lieutenant General Vasko Gjurchinovski, congratulating the jubilee to all members of the Army, as well as to the promoted, commended and recently retired, sent a message to continue with even greater commitment and dynamics in achieving greater results, as befits an Army, which is a member of NATO.

Priorities in the future will be reforms, transformation, modernization, as well as achieving greater fitness and training in order to justify the high rating and respect enjoyed by the Army among the citizens and the country in general.

In addition to Minister Petrovska and General Gjurchinovski, the former Chiefs of the General Staff, Generals Gorancho Koteski and Metodija Velichkovski, who this year fulfilled the legal requirements for retirement, addressed the audience, and received awards for their contribution to the development of the Army.

In their addresses to the audience, Generals Velichkovski and Koteski emphasized their pleasure to have been part of the Army for these thirty years and participated in its development, while wishing for even greater success in the future.

During the ceremony the Adjutant General of the Vermont National Guard Major General Gregory Knight, who attended the celebration as part of a two-day official visit to our country, also presented commendations to the Army for their commitment to performing tasks during the largest international exercise “Swift Response” which was carried out this spring at ATA Krivolak.

After the meeting, the Minister of Defence, Slavjanka Petrovska, the Chief of the General Staff, Lieutenant General Vasko Gjurchinovski and other attendees visited the exhibition of photographs on the occasion of the jubilee “30 years of the Army”, which is located in the hall of the Army House and which is open to visitors in the following period.

The gathering is part of the final planned activities marking the 30th anniversary of the establishment of the Army, in which an open event for citizens will be held tonight, starting at 6:30 p.m., at the military stadium in the city park in Skopje.

The central ceremony marking the anniversary will be held tomorrow, August 18, at the Ilinden barracks in Skopje, while in the other garrisons where the commands and units of the Army are located, military ceremonies would be held in the course of the day.