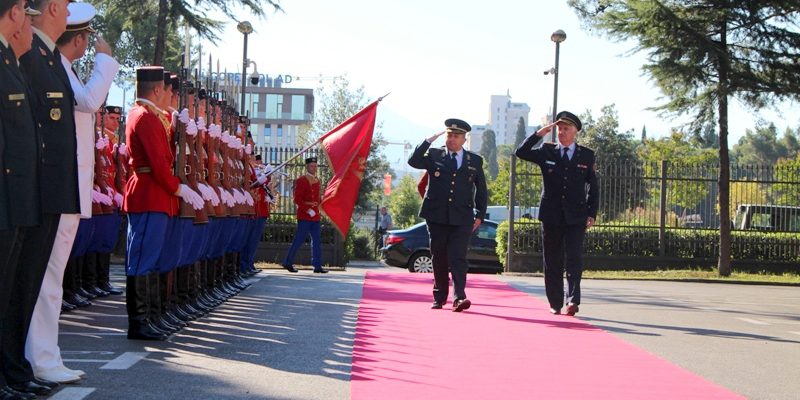 At the meeting, held at a level of Chiefs of General Staffs, more issues were addressed, among which were the following: increasing the existing bilateral military cooperation in the area of training and military education, as well as looking into the possibilities for new ways of cooperation through carrying out joint training and usage of the capacities of the Army Training Area Krivolak.

Both generals, Velichkovski and Jokic, expressed their belief that Montenegro’s accession to NATO, making it the 29th full member state of this military alliance, will send a positive signal to further unreserved support of our aspiration for NATO membership, and in that way will strengthen the security in the region.

These commitments were restated during the meeting of the ARM delegation with the Minister of Defense, Predrag Boskovich, which was also attended by the acting ambassador of Republic of Macedonia to Montenegro, Mrs. Suhena Kjerimi Baliu. The need to deepen the partnering cooperation between the Army of Republic of Macedonia and the Army of Montenegro in various segments of defense was also emphasized at the meeting.

The interlocutors in today’s meetings shared words of praise for the role and the manner in which the ARM dealt with the migration crisis, contributing to the decrease in this type of security risk for the entire region.

In the course of the day the ARM delegation visited the Air Force unit at the military base ‘Golubovci’ near Podgorca, where the possibilities for deepening the existing cooperation in this area were also seen.

During their stay in Montenegro, in the course of the following day, the delegation will attend the Day for distinguished guests and the closing ceremony of the military exercise ‘Joint Challenge 2017’ where 36 ARM members of the SOR participated alongside members from armies of Austria and Montenegro.

Previous cooperation between the ARM and the Montenegro Armed Forces is demonstrated through many activities, for example, joint training of members from both armies in the field of military Air Force, and training of the special forces, but also in military education where there are cadets from Montenegro being educated at the Military Academy in Republic of Macedonia “General Mihajlo Apostolski”.