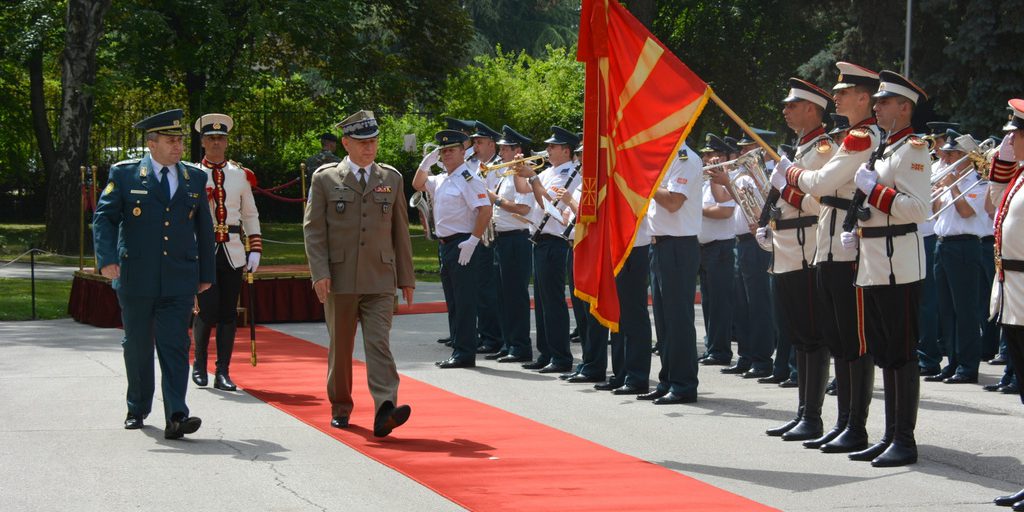 CGS of the AF of Poland, General Mieczysław Gocuł was greeted with a military ceremony and he was met by the Chief of GS of ARM, Lieutenant General Metodija Velichkovski. They had a meeting together with the representatives of the AF of Poland and some of the key personnel of the ARM.

At the meeting they talked about the mission of ARM, peacekeeping missions led by UN, NATO and EU, and about the ways of dealing with the migrant crisis. Additionally, they talked about the current regional security situation as well as intensification of their mutual defense cooperation including, joint training, exercises and missions of the special forces of both armies.

At the meeting, General Velichkovski said that this meeting was very important because it was the first meeting between the two chiefs of General Staff of the two armies especially before the coming NATO summit in Warsaw and after finishing the exercise “Anaconda 2016” where the ARM took part with 157 servicemen.

General Gocuł said that ARM considerably contributes to peacekeeping missions and international military exercises. The ARM servicemen demonstrated their interoperability and high standards at the NATO exercise held in Poland, where the Macedonian army showed how important ARM is in the regional collective security.

After their meeting at the GS of ARM, the Polish delegation escorted by General Velichkovski met the President of the Republic of Macedonia and the Supreme Commander of the Armed Forces, HE PhD Gjorge Ivanov. Later, the delegation is going to visit the border tower “Bogorodica” at the Macedonian-Greek south border and they are going to be briefed about the current situation of the migration crisis and the role of ARM in dealing with it.

The visit to Macedonia at the highest military level by Poland, which is the biggest and the most influential NATO country in Europe, gives credit to ARM as an army which fulfills its obligations, and shows that ARM have reached high standards of training and interoperability as other NATO member countries and it is aiding the future development in international relations.