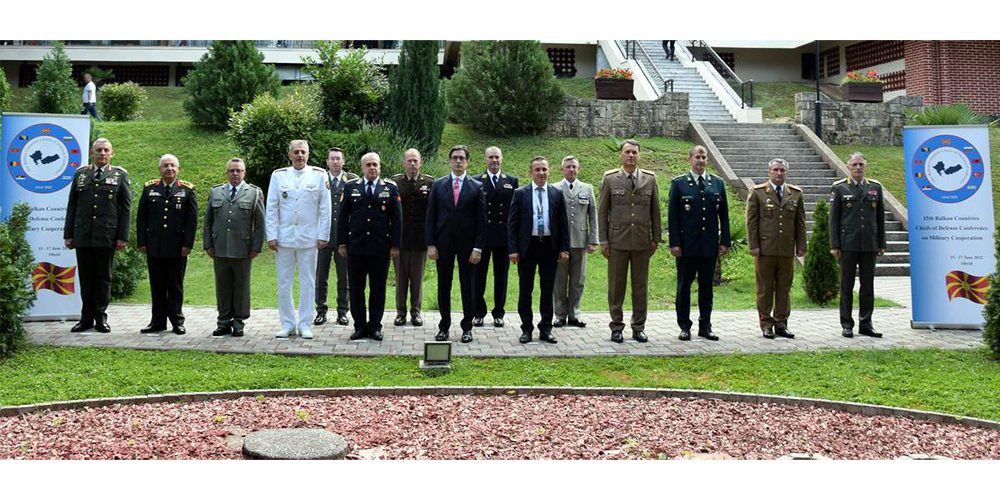 “The utilization of the Armed Forces in dealing with the latest challenges in a national and regional context (best practices)”, is the main topic of the Fifteenth Conference of the Chiefs of Defence of the Balkan countries, held in Ohrid today.

In his address to the Chiefs of Defence, President Pendarovski said: “You know best that the Russian aggression against Ukraine directly and indirectly threatens Europe as a whole. The Russian invasion also caused an energy crisis, high inflation, a food crisis and a slowdown in the post-pandemic recovery of national economies. I am convinced that the Balkans in the European Union will make Europe more stable and secure, and that NATO and the EU are the two guarantors of a secure and prosperous future on the continent.”

The Deputy Minister of Defense, Hassani, addressing the audience, emphasized that the Conference shows that the interest of all Balkan countries is mutual, and that is the preservation of security and peace and the creation of a strong and developed region, an example of cooperation. “We all have one goal, to provide the coming generations with a stable and safe future, a future that they will also create in these areas. We can and must do that, because this region has something to offer,” Hassani said.

General Gjurchinovski stressed the importance and benefits of the decisions made so far, which all these years are of great importance and have contributed to more successful cooperation, which ultimately results in a better security environment for all countries in the region. That is why this initiative is of great importance for the Republic of North Macedonia.

“We promised to cooperate in the development of military relations in order to improve and enhance military cooperation in the region at all levels and to contribute to an appropriate response to potential asymmetric and hybrid threats,” said General Gjurchinovski in his opening speech.

At the Conference, in addition to the discussing the main topic, talks are underway concerning the strengthening of the military cooperation of the Balkan countries, by finding ways of countering all security challenges, risks and threats in the region. This is primarily related to the implementation of common types of training, as well as the assessment of asymmetric threats in the Balkans.

The Chiefs of Defence of the Balkan countries will sign a joint statement at the end of the Conference, reaffirming their strong commitment to expand and strengthen military cooperation.

The focus of the Fifteenth Conference is on strengthening the military cooperation of the Balkan countries, by finding ways to counter all security challenges, risks and threats in the region, as well as continuing the processes started for mutual handling of modern security challenges, initiated at previous conferences.

Most of the activities initiated by the Conference consist of training and education, which achieve the required level of interoperability, thus enabling joint activities in different situations. This is primarily related to the implementation of joint exercise activities, as well as the assessment of asymmetric threats in the Balkans.

Observers at the conference were the Chief of Defence of the Croatian Armed Forces, Admiral Robert Hranj, as well as representatives from the EU Military Committee, Major General Johan Frank, the Commander-in-Chief of the Allied Forces Europe, Lieutenant Colonel Brice Houdet, NATO Joint Force Command Naples and Commander of US Army Europe and Africa, Lieutenant General John Kolasheski.

The Forum of Balkan Chiefs of Defence has nine members (Albania, BiH, Bulgaria, Greece, North Macedonia, Romania, Serbia, Turkey and Montenegro). It was established at the initiative of Greece and Turkey in 2006, which was officially established by the Chiefs of Staff of the Balkan countries on 10 May, 2007 in Brussels.

The conference of the Chiefs of Defence of the Balkan countries is held once a year on a rotating basis and fourteen conferences have been held so far.