New Year’s Concert of Military Orchestras from Republic of Macedonia, Montenegro and Bulgaria 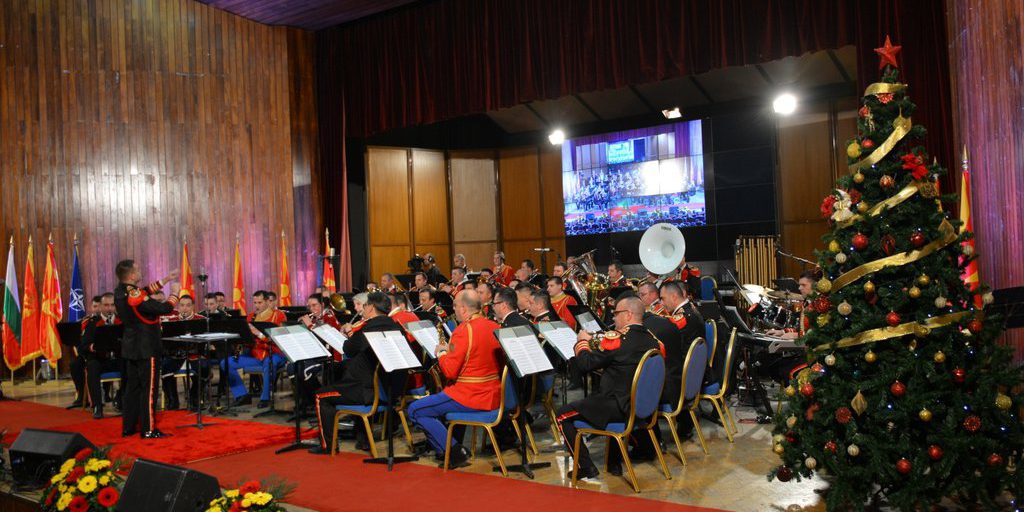 The Military orchestra of ARM, together with members of military orchestras from the Armed Forces of Bulgaria and Montenegro Army, performed a memorable New Year’s concert at the House of ARM in Skopje.

The trilateral New Year’s concert was attended by the highest state and military leaders among which were the Macedonian Prime Minister, the Minister of Defense, the ARM CGS, CGS of the Montenegro Army, Macedonian Ministers, ambassadors and representatives of the military-diplomatic corps accredited to Republic of Macedonia, active and retired ARM Generals, members of the Ministry of Defense, the ARM General Staff, representatives from all commands and units of the ARM and other guests.

The military orchestra led by conductors from the three orchestras, in front of the audience in the packed concert hall of the House of ARM, performed together in a one-hour concert on the occasion of the forthcoming New Year and Christmas holidays, in honor of the members of the armies in the region and the mutual regional cooperation.

During the last night’s concert of the military orchestras from three different armies, the attendees had a unique opportunity to enjoy in the performance of different compositions from popular domestic and world-known authors and film music themes, which was concluded with the famous Radetzky March by Johann Strauss Sr.

Beni Shakiri, who performed the well known Macedonian song ‘Kazi neshto draga’, and Kristina Arnaudova, who performed ‘All I want for Christmas is you’ were guests at the concert which was hosted by Irena Spirovska.

The trilateral performance of the military orchestras is a project which is carried out for the first time in this combination, planned as part of the regional military cooperation aiming to deepen the mutual cooperation and bring the army closer to the citizens.