Handover Ceremony for the Commander of the 4th Mechanized Infantry Battalion 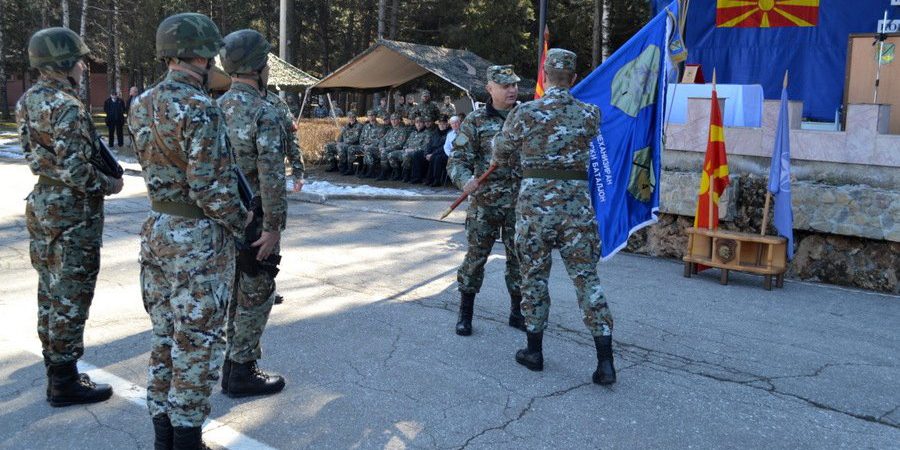 Today, at the military barracks “Chede Filipovski-Dame” in Kichevo, there was a handover ceremony for the Commander of the 4th Mechanized Infantry Battalion (4MIBn) within the 1st Mechanized Infantry Brigade (1MIBde). Lieutenant Colonel Boro Latkoski has handed over the command of 4MIBn to Lieutenant Colonel Goran Trajanoski, who was Commander of 2nd Logistics Battalion in Kichevo garrison.

The guests at the handover ceremony included units’ Commanders within 1MIBde, and local community representatives who have been cooperating with 4MIBn for years.

At the ceremony, the Commander of the 1MIBde Brigadier General Mirche Gjorgoski addressed the guests and talked about the accomplished tasks of the unit commending the outgoing commander for his successful work, and welcoming the incoming commander. The outgoing commander of the 4MIBn Lieutenant Colonel Boro Latkoski thanked the unit’s personnel for their selfless support. The incoming Commander Lieutenant Colonel Goran Trajanoski said he is privileged to assume command of the 4MIBn and stated that he will be dedicated and conscientious in his leadership of the unit. The 4MIBn personnel presented Lieutenant Colonel Boro Latkoski with a unit’s logo plaque.

At the handover ceremony the outgoing commander gave the flag into the incoming commander’s hand which was the formal moment of transfer of command of the 4MIBn. Afterwards, the subordinate units of 4MIBn had a military.