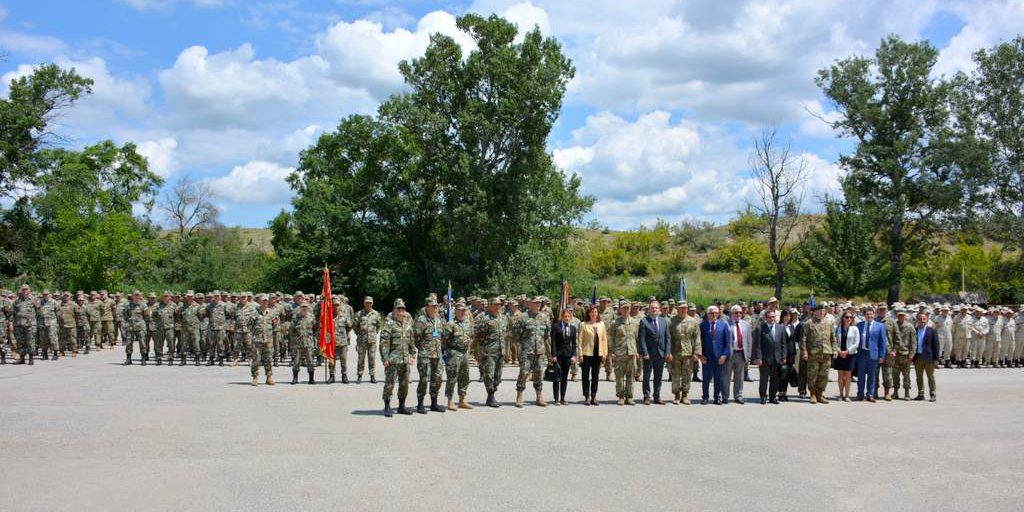 At the “Krivolak” training area, at the “Strela” camp with the ceremony for the solemn opening of the international terrain exercise “Decisive Strike”, commenced the planned activities for this exercise, which will last till July 9.

The Deputy Minister of Defense, Mr. Bekim Maksuti, the Deputy Minister of Defense of Lithuania, Mr. Vytautas Umbrasas, the Chargé d’Affaires of USA in Republic of North Macedonia Ms. Micaela Schweitzer-Bluhm, the Ambassador of Bulgaria in Republic of North Macedonia, Mr. Angel Angelov, the Commander of JOC, Major General Pavle Arsovski and representatives from the Embassy of USA in Skopje, were present at the opening of the exercise.

At the opening of the exercise the Deputy Minister of Defense, Bekim Maksuti remarked that this was the greatest exercise organized by our army and that it happened at the right time when our country was exceptionally proud of the achieved and that the Alliance received an honest and dedicated ally. The deputy minister asked the soldiers – participants at the exercise to be dedicated and open to each other because they were allies, part of the same alliance. Regarding the “Krivolak” training area he mentioned that it was an area that offered all conditions for real exercise.

The acting ambassador of USA, Micaela Schweitcer – Bluhm expressed gratitude and congratulated to the Army for the organization of the exercise. “The exercises such as “Decisive Strike” plays major role in the strengthening of our mutual security. They allow our armies to communicate and to perform mutual operations. They connect our soldiers, building mutual trust and personal bonds that last and make us stronger” said Schweitcer – Bluhm .

Also the Commander of the Joint Operations Command, the command which is responsible for the performance of the exercise, Major General Pavle Arsovski said: “There was no better moment and timing for organization of this kind of exercise than in the year when NATO celebrates the 70th anniversary and while the process for ratification of the NATO membership invitation in the national parliaments of the 29 members nations.”

The Director of the exercise, Lieutenant Colonel Igor Manasovski, addressing to the participants of the exercise said: “The “Decisive Strike” exercise is national joint combined exercise for integration, which in the planning process was supported by more than 80 officers and NCOs of the Armed Forces of USA, Albania, Bulgaria, Lithuania, Monte Negro and Republic of North Macedonia. We have at our disposal the huge training capacities of the “Krivolak” training area, use them. The learnt lessons will be the foundations on which we will build the success of our mutual operations. Although the conditions for fulfillment of this goal are less than comfortable, still I expect from every one of you to give the best of you and your own unit.”

Prior the exercise there were months of individual and collective preparations, in order to train and exercise and perform in different situations. After the solemn opening, during the afternoon at the “Ogan” and “Livada” camps there will be familiarization with the weapons and the equipment which will be used within the exercise.

The goal of the exercise is to share the gained knowledge and share experiences among the armed forces of the participating nations by mutual performance of the assignments.