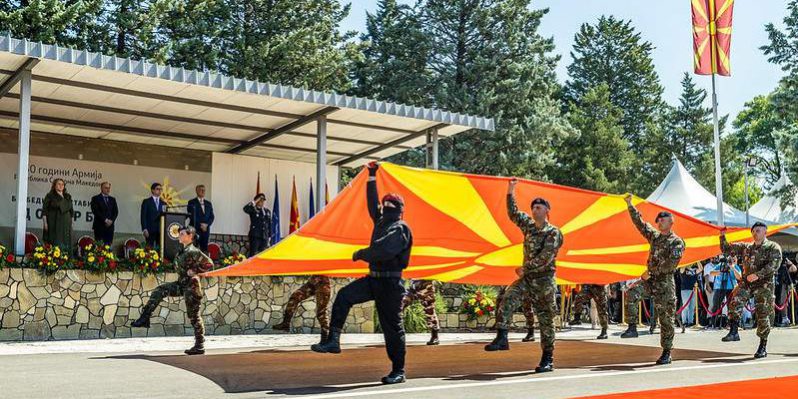 The Army of the Republic of North Macedonia proudly celebrated its jubilee and the achievements during its thirty years of growth and development with a central ceremony that took place in the Ilinden barracks in Skopje.

At the beginning of the ceremony, the Chief of the General Staff of the Army, Lieutenant-Colonel General Vasko Gjurchinovski, the Minister of Defense, Slavjanka Petrovska, and the President and Commander-in Chief of the Armed Forces, Stevo Pendarovski, addressed the audience.

In his speech, General Gjurchinovski emphasized that many generations of employees of the Ministry of Defense and the Army, soldiers, officers and civilians, as well as employees from the public sector actively invested in the three-decade development of the Army, which is respected by the citizens and a NATO member.

“We dedicate the celebration of this significant anniversary in the barracks that carries the holy name Ilinden to the endeavor and sacrifices of all our heroes and great men for the centuries-old struggle for freedom and peace. On this solemn jubilee, I want to say that the Army has always worked and will work only for the interests of the citizens and our homeland” General Gjurchinovski pointed out.

At the end of his speech, General Gjurchinovski told the Army members: “I expect you to continue representing the military profession, the Army and our country with dedication, responsibility, dignity and pride.”

The Minister of Defense, Slavjanka Petrovska, focused in her speech on the achievements in the Army’s thirty-year existence, the key decisions made in this past period, the Army’s place in society as the most trusted institution, as well as the defense development processes, the modernization of the Army and the development and motivation of all army personnel and defense officers.

“Thirty years of existence is a long period during which all of us remember as a time in which the limits of our own achievements were diligently pushed. The well-deserved place that the Army has today at home and in the NATO Alliance is an achievement to which many individuals, such as former Presidents, Governments, Ministers of Defense, Chiefs of the General Staff, officers, soldiers and employees, have committed themselves” said the Minister.

We restored the dignity of the “men in uniform” and made them worthy of their place in society as persons in whom the citizens have the greatest confidence. Continue to protect our country, and we will continue with even greater commitment to take care of all of you!

The President and Commander-in-Chief of the Armed Forces Stevo Pendarovski pointed out in his speech: “The army was also the main driver force behind our NATO membership. Since the very beginning, the state designed the Macedonian defense with a clear goal and intention to one day see it fully integrated into the Euro-Atlantic security system. Since then, we went through several periods of unprincipled external blockades and missed internal priorities which stalled our way towards the collective security systems. However, the Army continued undergoing reforms and thus helped us not to step out from the realization of our strategic goal. Therefore, we can rightfully say that as a country, we have achieved our biggest success in foreign policy, to a large extend thanks to the Army and its brave women and men in uniform.”

Addressing the members of the Army, as Commander-in-Chief he told them: “In this jubilee year, as we celebrate the past and visualize the future, we are aware of the biggest burden that falls on the shoulders of the brave men and women in uniform. I am convinced that, same as before, you will continue to be responsible and reliable guardians of the country, protectors of citizens, a pillar of our multi-ethnic society and an investment in national and collective security and defense.”

At the ceremony, President Pendarovski honored the First Minister of Defense, Trajan Gocevski, the Logistic Base of the Army and the Reserve Officers Organization, with the Order of Military Merit.

On behalf of the Minister of Defense, Slavjanka Petrovska, the commander of the Vermont National Guard, Major General Gregory Knight, who is on a two-day official visit to our country, was awarded recognition for his support and cooperation so far.

The jubilee ceremony, symbolically, through the parade of echelons of all commands and Army units, the exhibited modern combat vehicles, including the newly received light armored vehicles, presented the achievement and readiness of the Army, which is proudly celebrating its birthday as a full-fledged NATO member for the second time.

The central ceremony was attended by the President of the Government of the Republic of North Macedonia, Dimitar Kovacevski, the Vice President of the Parliament, Goran Misovski, the Ministers in the Government, representatives of the diplomatic corps, former Ministers of Defense and Chiefs of the General Staff, Generals in the Army, commanders of commands and units of the Army and representatives of organizations with which the Army cooperates.

The central ceremony is one of the closing activities that marked 30 years of the Army. Among the events there was an exhibition on the occasion of the 30th anniversary, an open day for citizens, forums, sports competitions, humanitarian actions and celebrations in the units.