Briefing on combat readiness of ARM in 2013 given to the President of the Republic of Macedonia and the Supreme Commander of the Armed Forces Dr. Gjorgje Ivanov 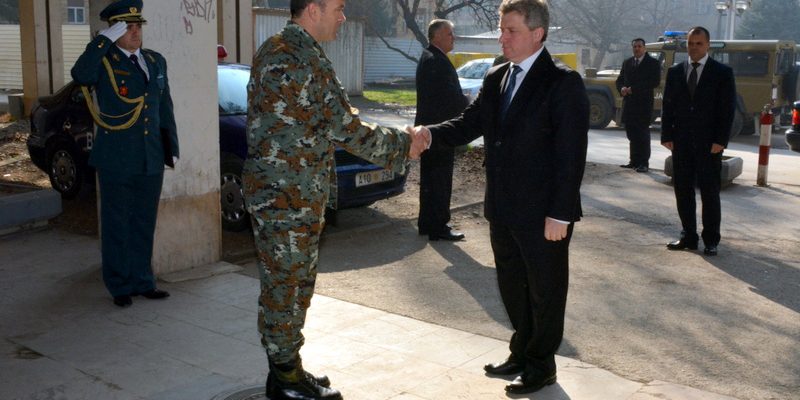 Today, 17th February 2014, briefing on combat readiness of ARM in 2013, was held in the Army House in Skopje. The President of the Republic of Macedonia and the Supreme Commander of the Armed Forces dr. Gjorgje Ivanov, Minister of Defence Talat Xhaferi, Chief of General Staff of ARM Lieutenant-General Goranco Koteski, Deputy Minister of Defence Emil Dimitriev, President of the Commission for Defence and Security of the Assembly of Republic of Macedonia Vlatko Gjorchev, and the commanders of subordinate commands and units, as well as the key personnel from MOD and GS, attended the briefing.

At the briefing Chief of General Staff of ARM Lieutenant-General Goranco Koteski informed The President of the Republic of Macedonia and the Supreme Commander of the Armed Forces dr. Gjorgje Ivanov about the implementation of plans and objectives in 2013, according to the Army functional areas, related to: personnel management, morale, force protection, operations, training, and exercises, logistic support, planning, signals and communications, budgeting, and civilian-military cooperation.

Based on comprehensive annual analysis concluded by the General Staff in the past year, despite the objective difficulties and limitations, the Army successfully carried out the mission and assigned tasks, and the combat readiness was at the required level. The Chief of General Staff especially accentuated the successful execution of key tasks and projects of the Army that marked the past year such as: the implementation of the new structure of ARM , full equipment of the Army with new combat uniform, successful completion of international missions abroad, assistance to institutions during natural disasters and rescue, adoption of a number of doctrinal rules and guidelines, as well as ones referring to smooth execution of complex tasks, enhancement of regional and international inter Army cooperation.

Minister of Defence Talat Xhaferi noted that in 2014, the Army will get maximum support to enhance the combat readiness.

The main priorities and measures in 2014 that will contribute to further strengthening and raising the level of combat readiness and morale of members of the Army are the following: regular employment of Army personnel, continuing with the implementation of the new structure of the ARM; adjustment of training according to current security challenges and requirements of NATO; starting the process of planning for active participation in post – ISAF mission; implementation plan for modernization and more effective financing or ARM; selling old ARM equipment; awarding funds in the MOD budget from the sale of MOD property; implementation of the project, ”ARM -My home “; starting with the implementation of the concept for reserve forces; further increase of training of the ARM members.

CHOD of ARM asked the process of modernization of the Army to commence, according to long-term plan to modernize the defence, which was adopted in December 2013 by the Government of the Republic of Macedonia. He also called for greater responsibility and real insight in conditions of Army considering all entities and institutions in the Republic of Macedonia having constitutional and legal jurisdiction.