Marking the Day of the First Infantry Brigade 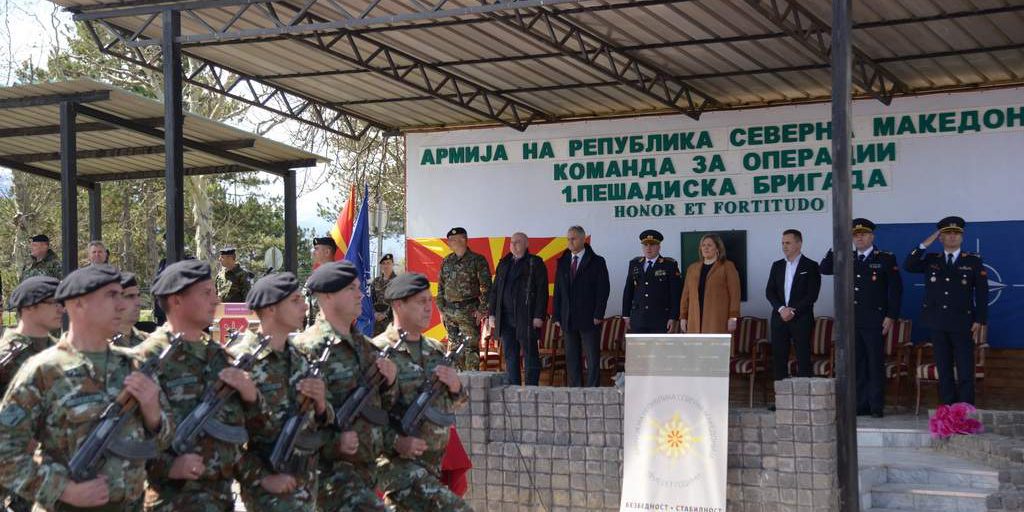 As part of the activities on the occasion of the 30th anniversary of the Army, today in the barracks “Strasho Pindjur” in Petrovec, the Day of the largest combat unit in the Army – the First Infantry Brigade was marked with a military ceremony.

Several activities were realized at the ceremony, which was attended by the Minister of Defense, Slavjanka Petrovska and the Chief of General Staff, Lieutenant General Vasko Gjurchinovski. The ceremony was also attended by officials from the Ministry of Defense and the Army.

After playing the anthems and platoon marching with the honorary flag, the Minister Slavjanka Petrovska, the Commander of the Operations Command, Brigadier General Besnik Emini and the Commander of the Brigade, Colonel Sashko Lafchiski addressed the members of the brigade.

The Minister of Defense, Slavjanka Petrovska, addressing the members of the brigade and congratulating the Unit Day, said that this is a unit that promotes the best values of the compositions from which it originated and that best reflects the diversity of ethnicity and gender equality.

The Commander of the Operations Command, Brigadier General Besnik Emini, emphasized that the development of the First Infantry Brigade is strongly linked to our society and reflects the transformation of our defense security community and that in accordance with the long-term plan for developing defense capacities, to increasing the percentage of modernization from the defense budget, by investing in Army equipment, the preparedness status is significantly improved.

The commander of the brigade, Colonel Sasko Lafchiski emphasized in his speech that on this day all former officers, non-commissioned officers and soldiers are recognized for their contribution to building the unit and added that the First Infantry Brigade continues to be a crucial fighting force and fist of the Army, always ready to defend the homeland, national interests, territorial integrity and sovereignty.

On the occasion of the Unit Day, several incentive measures and promotions were awarded to the members of the brigade, and the best unit of the brigade was declared.

At the end of the ceremony, echelons from all units of the brigade conducted a ceremonial marching parade, and cultural and entertainment associations with which the brigade cooperates performed for the attendees.

Besides the Minister of Defense, Slavjanka Petrovska and the Chief of General Staff, Lieutenant General Vasko Gjurchinovski the ceremony was also attended by the Deputy Minister of Defense, Bashkim Hasani, Deputy Chief of General Staff, Major General Azim Nuredin,State Secretary Dragan Nikolikj, Director General Major Zoran Mileski, representatives of the Cabinet of the President of the Republic of North Macedonia, the military leadership of the General Staff and subordinate commanders, generals in the Army, former unit commanders, military leadership of the Ministry of Defense and the General Staff, former commanders, representatives of the local self-government and the organizations with which the unit cooperates.

April 2 is designated as the Day of the 1st Infantry Brigade, as a date on which this unit was transformed according to the organizational-formation army structure with which it takes over the tasks and responsibilities of the two former brigades, thus becoming the largest combat unit with several army ranks.