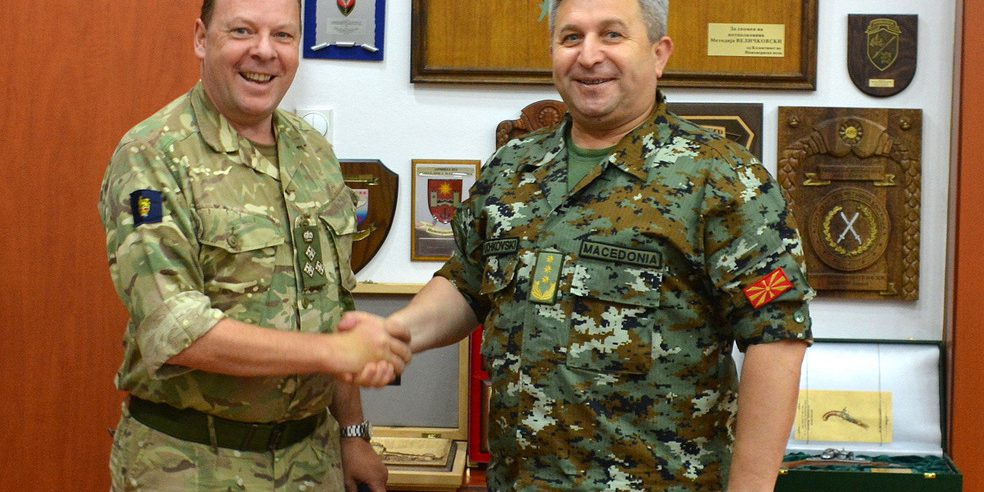 Today, in the premises of ARM GS a meeting and conversations took place between the Chief of GS of ARM, Lieutenant General Metodija Velichkovski and the Commander of the 160th Infantry Brigade and the Welsh headquarters of the United Kingdom AF, Brigadier General Alan Richmond who is on an official visit of the Army of the Republic of Macedonia.

During the reception with the Chief of General Staff of ARM, a review was given on the mutual cooperation between the two armies in the field of defense, especially in the field of military education and training, as well as joint participation in peacekeeping operations and planned future engagements in this field.

During the visit of Ilinden barracks, Brigadier General Richmond met Brigadier General Orce Jordev, and after the briefing about Special Operations Regiment, General Richmond had an opportunity to attend a demonstration exercise during which the members of SOR showed their climbing skills up the exercise tower, and part of the alpine equipment of the unit was also displayed.

The high level of cooperation between ARM and the United Kingdom AF continuously takes place in many areas, primarily in the field of military education and joint participation in exercises. So far we have jointly participated in ISAF peacekeeping mission.