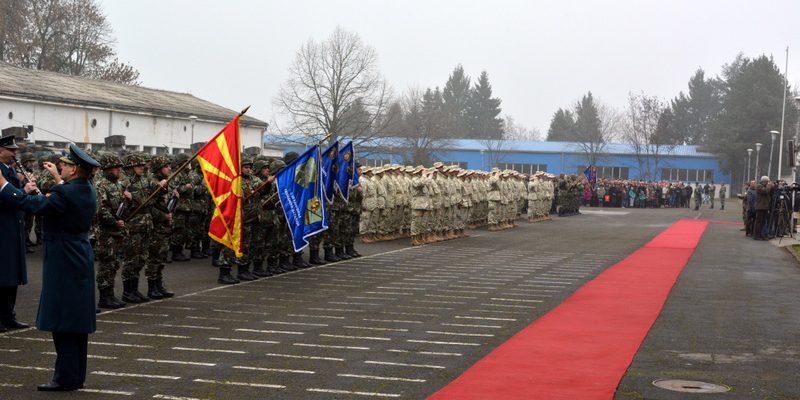 Today, 8th January 2014, at the barracks Kuzman Josifovski-Pitu in Tetovo a send- off ceremony was held in honour of the deployment of the ARM contingent, part of the 1st Mechanized Infantry Brigade (1st MIB), to the peace keeping mission ISAF in Afghanistan.

The Chief of ARM GS addressing the contingent service personnel, said that the main advantage of our deployment to the ISAF mission, is the fact that the Republic of Macedonia and ARM take part as an equal member of NATO, alongside with all partner countries, and thus have become an esteemed and desired partner proving our country’s dedication to regional and international peace. General Koteski emphasized that with the participation of this contingent, the number of ARM service personnel that have been deployed to missions outside of the Republic of Macedonia will reach 3000, which means that one third of ARM service personnel will have mission experience. At the same time the General asked the servicemen of the contingent to respect the command principles, and to carry out their task and duties during their deployment in the ISAF mission with responsibility, professional conduct and courage.

Minister Djaferi also adressed the service personnel, expressing his assurance in the readiness of the contingent for the upcoming mission, stating that the mission of this contingent is the same as always, the ARM service personnel as a part of the ISAF mission are our best peace ambassadors, contributing to the promotion and protection of the peace and stability in Afghanistan. Minister Djaferi stressed the fact that the participation of the Republic of Macedonia is of great value and widely aknowledged, and with the participation in the peace operations we have shown and proven to be a dedicated and reliable member of the international community by giving significant contribution to peace building and stability in the Euro-Atlantic region and the rest of the world.

ARM will take part in the sixteenth rotation of the ISAF peacekeeping mission in Afghanistan with 150 service personnel of the 1st Mechanized Infantry Brigade, and together with the oldest national representative they will be stationed at the ISAF Headquarters in Kabul.