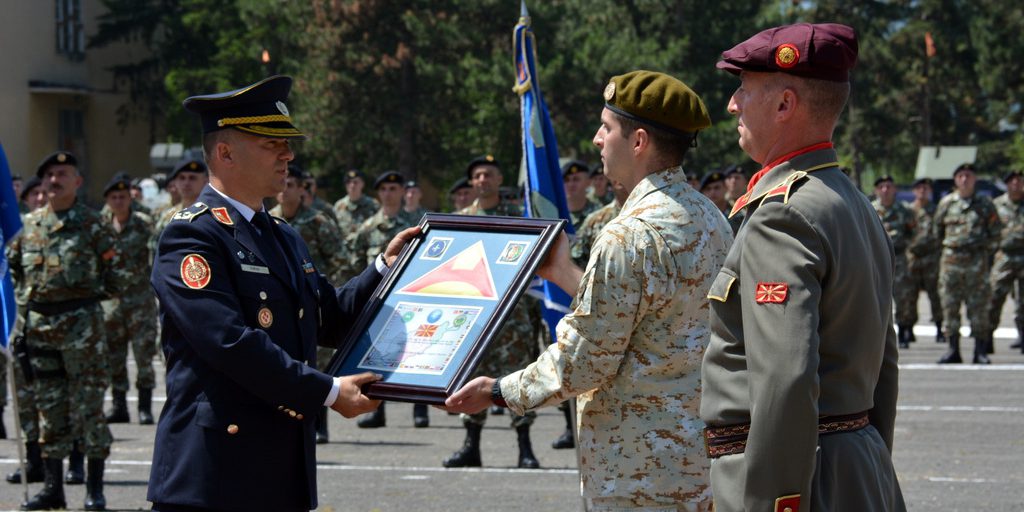 Lt. Col. Feto Bajrami, commander of the first Macedonian contingent in Afghanistan in 2003, said that for a soldier and an officer, there is no higher honor than representing his country and his Army in an international mission.

“The challenge of representing our Army, our country, at that time aspiring to join the NATO Alliance, was enormous. But the determination accompanied by immense work, training and exercising, has contributed to a worthy tracing of the path for future generations of our colleagues who have continued to be successful in their missions in Afghanistan,” Bajrami said.

Minister Shekerinska said at the ceremony that the country’s membership in NATO is a merit of the engagement of over 3,500 army members in the “Resolute Support” and “ISAF” missions in Afghanistan.
“You were the ticket for the Republic of North Macedonia to join the most powerful military-political alliance. Despite all the political efforts, your sacrifice, your risk, your responsibility, your work, were the ones who presented us in the best light,” said the Minister.

The President and the Supreme of the Armed Forces said that from a beneficiary country, we have become an exporter of security and that a few decades ago it could not have been imagined that our soldiers would one day be part of world peacekeeping missions, because we had such missions in our country.

“This peacekeeping mission has confirmed that our troops can serve successfully in any peacekeeping mission, that they are trained to the highest professional level and in accordance with the highest NATO standards. Of course, this mission would not have been possible without the support of our then partners, and now allies – the United States, the United Kingdom, Turkey, the Czech Republic, Greece, Norway and Germany,” said President Pendarovski.

Army members have been participating in Alliance missions in Afghanistan, ISAF and Resolute Support since 2002. In the period from 2002 to 2015, about 3,000 members of the Army were part of the ISAF force, on different positions and with different tasks. Our soldiers, non-commissioned officers and officers worked as staff officers, members of the main command security units, instructors in mentoring teams, and were part of medical and surgical teams. In ISAF, special units also contributed, working with members of the Vermont National Guard in joint teams. Since 2015, members of the Army have contributed to the successor mission, “Resolute Support”, with 500 members deployed to the Mission Command Training, Counseling and Assistance Command in Kabul, with the task of securing the Command. They also worked in a command team in the North -HQ, within the joint contribution of the group A5 in the Center for Joint Operations of KOSA – North and in the surgical team in the Norwegian Role-2 hospital.