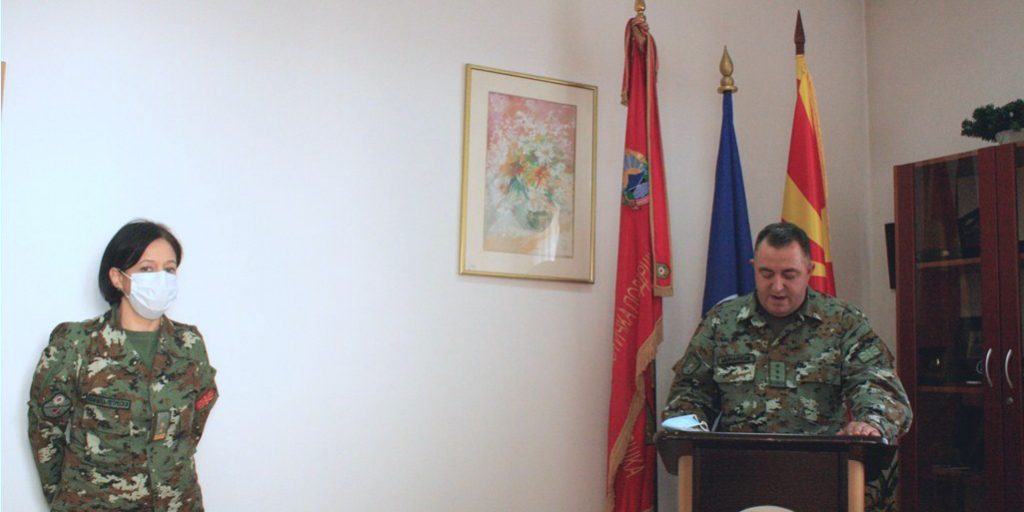 At the battalion for Military Medical Support there was commander duty handover ceremony where the newly-appointed commander Lieutenant Colonel Elizabeta Naumovska-Petreski, who was the Battalion’s Chief of Staff and Deputy Commander, took over from the now former Commander Colonel Irena Mineva, who left this position in order to attend speciality training and training for higher military responsibilities.

The Commander of the Logistics Base, the command unit of the battalion, Colonel Muharem Muharemi in his speech emphasised the importance of this military medical unit, one of its kind in the army, as one of the pillars of the Base, where its highly trained members professionally take care of the lives and health of the members of the Army and the citizens of our country. He also expressed his gratitude to the former commander, Colonel Irena Mineva for her professional work, and her ability to overcome the challenges in providing constant medical support by wisely using her experience and the resources and capacities that were at her disposal.

He stated that the newly appointed Commander Lieutenant Colonel Naumova-Petreski will not only be the new leader but also a productive member of this already established team of the unit. Colonel Muharemi ended his speech by wishing a lot of success in the former commander’s future career and expressed gratitude for her accomplishments with the unit, and he also wished success to the new commander in performing her new duties and her leadership.

In her speech Lieutenant Colonel Elizabeta Naumovska-Petreski, expressed her gratitude for the trust that was placed in her and her determination to earn it by maximum engagement, high professionalisms, respecting diverse opinions and most importantly with the support of her colleagues. She also said that together they would continue as before to perform their tasks motivated to change things for the better because they can and know how. In the end she stated that their accomplished deeds will be their strongest weapon-stronger than any words.