Handover of duty “Commander of the 3.mehanized Infantry Battalion” 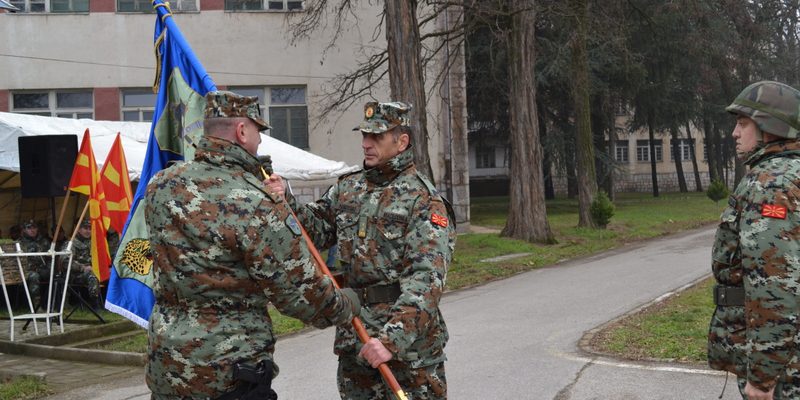 On 03.01.2014, starting at 12:00 pm at the barracks “Kuzman Josifovski – Pitu” in Tetovo, was held a military ceremony marking the handover of duty as commander of 3.mehaniziran Infantry Battalion (3.mib) from 1. Mechanized Infantry Brigade (1st MIB). On this occasion, on the ceremony attended: Brigade Commander Brigadier General Pavle Arsoski, commanders of subordinate units of the 1st MIB, local government representatives and guests from civilian structures in the area of responsibility and other guests.

During the handover ceremony have their addresses: Commander of the 1st MIB Brigadier General Pavle Arsoski, 3.mib outgoing commander, Ltc. Blaze Nikolovski and 3.mib new commander, Ltc. Atanas Panovski.
Lieutenant colonel Atanas Panovski has completed Military high school in Belgrade, Military Academy of Land Forces Artillery branch in Zadar and Belgrade. Post graduate studies – specialization for command and staff duties has completed in the Naval Postgraduate School in Montrej, USA. In his rich and successful military career has been in all military duties ranging from platoon commander and deputy commander of the Special Operations Battalion and operations officer and combat readiness in GS of the Army.

During the execution of duty Ltc. Blaze Nikolovski has a great contribution in building of combat readiness of the unit and proved highly professional and has shown that capable leaders can successfully cope with all challenges of modern times as commander of the peacekeeping contingent in ISAF operation in Afghanistan.