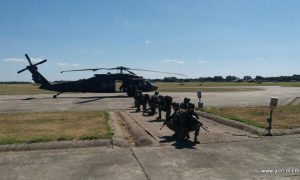 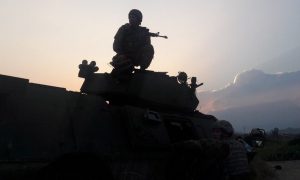 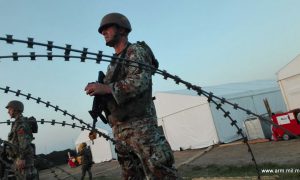 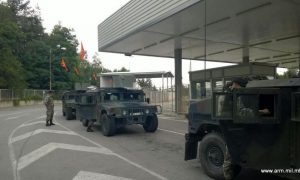 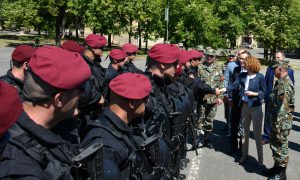 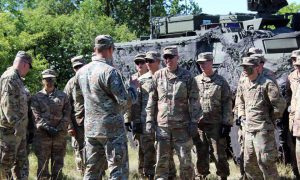 SPECIFICATIONS OF THE EXERCISE

GENERAL CHARACTERISTICS OF THE EXERCISE:

„Saber Guardian 2017“ is a multinational exercise organized and led by the United States Army Europe (USAREUR), as part of the joint exercise program for USEUCOM.

It is an exercise of great proportions, an event that involves more than 25,000 service members of the armed forces from over 20 ally and partner nations, it is considered the largest of the Black Sea Region exercises this year.

PURPOSE OF THE EXERCISE:

„Saber Guardian 2017“ aims to promote stability and security in the Black Sea Region, strengthening of the partnership capacities and mutual trust as well as interoperability of the USAREUR and the land forces of the countries participants.

In addition, the exercise „Saber Guardian 17“ aims to accomplish interoperability within NATO and PfP collaboration, increased contribution in the current and future operations led by NATO, preparation for executing joint land operations through simultaneous combination of attack, defense and operations for stability of the area.

ELEMENTS OF THE EXERCISE:

– Preparations for departure and sent-off ceremony for the ARM contingent (visit by the Minister of Defense Radmila Shekerinska, the USA Ambassador to Macedonia H.E. Jess Baily, DCHGS of ARM  Major General Muhamet Racaj, representatives of MoD of R. Macedonia, ARM and the USA Embassy in Macedonia).

– Departure of the contingent of ARM participants;

– Participation in the exercise activities.

– Delegation of MoD and ARM participates at the Distinguished Visitors Day of the exercise.

CONTACTS FOR MEDIA COVERAGE OF THE EXERCISE:

LINKS FOR FOLLOWING THE ACTIVITIES:

MEDIA COVERAGE OF THE ACTIVITIES OF THE CONTIGENT OF ARM PARTICIPANTS

More significant activities will be reported on the official and facebook pages of ARM and MoD.

ARM service personnel consisting of members from the Military Police Battalion, Special Operations Regiment and the Engineer Battalion from 07.07.2017 to 21.07.2017 will take part in the exercise “Saber Guardian 2017”, which will take place in the Republic of Romania and the Republic of Bulgaria.

The exercise “Saber Guardian 2017” is a U.S Army Europe- led exercise and it will involve more than 25.000 service personnel from 23 NATO countries and partner nations.

The Army of the Republic of Macedonia has been participating in this annual exercise since 2013.

The exercise “Saber Guardian 2017“ is a multinational Command Post and Field Post computer-assisted exercise. This exercise will also include: Air defence artillery live fire exercise in Romania and Bulgaria, Building river crossings training, Mass casualty exercise and other activities. At the same time the national Bulgarian armed forces exercise “Peace Sentinel” will be conducted, and as a follow-up exercise, in the Republic of Macedonia, part of the service personnel of the “2 Cavalry Regiment“ (2CR) of the U.S. Army Europe will carry out the bilateral exercise of ARM and the U.S. Army Europe,  “Dragoon Ride 17”.

The units of the Army of the Republic of Macedonia, by participating in these multinational exercises, with their capabilities and experience, have demonstrated compatibility with the procedures and standards used by NATO partner armies.